CLAY: Jim Jordan. Man, he gets a lot out in a relatively short period of time, really good dude. I appreciate him coming on and hanging out with us. And when you hear him talk and how smooth and efficient and effective he is at making arguments, you kind of get a sense of what’s really at play here as the January 6th investigation continues to play itself out. Chuck Schumer, of course, said there wasn’t absolutely no doubt there was no way for Jim Jordan, that he could be a member of this committee. Let’s listen to good old Chuck.

SCHUMER: So Speaker Pelosi had no choice but to move on her own, as she did, and she put together a commission. Um, I couldn’t believe that, uh, McC — Leader McCarthy put two people who said… Who basically who really didn’t believe — sort of supported the big lie that did all this, you know, that the election was stolen and Donald Trump should really be president, which has no factual basis. 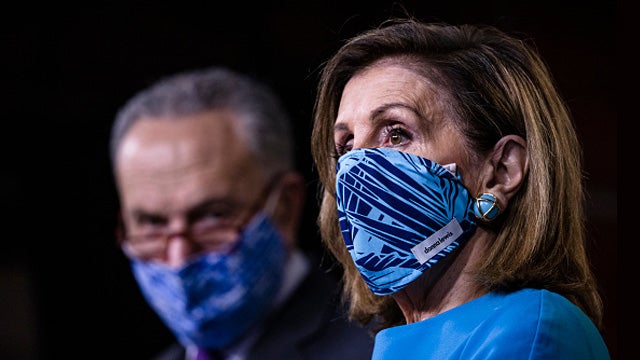 So she was right not to let them stay on the commission. And I still believe what she put together, while a bipartisan nine (sputters) nonpartisan 9/11 Commission would have been better, better to have this and it has, you know, Liz Cheney on it. She’s hardly a Democrat, but she’s a seeker of truth. We need to get to the bottom of this! There are so many unanswered questions, and one of the most serious assaults on our democracy that’s happened in our whole history.

BUCK: I gotta tell you, Chuck Schumer is actually impressive, Clay, because to be that disingenuous, that slimy as a politician all at once. Oh, yeah, Liz Cheney’s a truth-seeker. That’s why they like Liz Cheney. Maybe they could just bring on the folks from the Lincoln Project to tell us what the conservative base thinks these days. This is stupid beyond words.

But I also love that Pelosi does something unprecedented, petty, and spiteful, but, Clay, she had no choice. There was no choice when she made the choice to do this thing that no one ever does on these committees. So McCarthy pulled all of his nominees; now you get into this childish back-and-forth.

But here’s the thing. It has to all be about the drama because it’s not about the facts. The January 6th Commission is, as I said at BuckSexton.com today, an unfunny joke. The whole thing! They’re not even releasing the video they have from inside the Capitol. Let us see what happened. Let us see the terrifying grannies walking around taking selfies inside.

CLAY: That, first of all, should happen, right? But I love playing clips of people who are guests on this show, and this come on, and they’re eminently reasonable, and you listen to ’em and you say, “You know what? That’s…” You can agree or disagree with political opinion. That’s the great thing about politics. My mom always used to say, “Opinions are like butts; everybody’s got one.”

So you can agree or disagree with whatever opinions are out there. But when these guys get attacked like happened with Rand Paul when we play Joy Behar, we play Chuck Schumer here talking about Jim Jordan, you see how the unfair attacks often are. Jim Jordan’s perspective is not radical on January 6th. It’s just, “Hey, the guys should be punished who did something wrong.” That’s it.

This story originally appeared in Clay Travis and Buck Sexton

About The Clay Travis and Buck Sexton Show