"It's scary and entertaining at the same time," Guide Host Ken Matthews said describing Joe Biden's laughable, sometimes "gibberish"-filled performance on the world stage at G7 in Cornwall, England. "I feel guilty because I'm entertained by so much of it."

Ken pointed out that, although CNN's usual editing of their lionized idol Biden makes him occasionally appear to be of the caliber of a local councilman, the bigger world stage ensures he is "more exposed" in a way that can't be hidden.

One thing Biden will try to keep under wraps, though: his anticipated talks with Putin, with whom Ken noted he won't have a one-on-one press conference, although both leaders have said the relationship between the two countries is at a low point.

Ken continued with Biden's antics that are examples of "stuff you just can't write" by highlighting his announcement with other G7 "leaders of wealthy democracies" (as the New York Times called them) to end public support for coal. This stems from them "still milking climate change," Ken said.

Whether it's climate change, Russia, China (which announced through their London embassy that "the days when global decisions were dictated by a small group of countries are long gone"), Ken firmly declared that the "United States is being taken advantage of by the world. Putin is looking at Biden and seeing he's done nothing to stand up to Putin. That's what happens when politicians don't put America first." And that "the problem with this country is that for decades on end we don't get America Firsters in the White House."

President Trump, who Ken wished a happy birthday to along with his own brother in North Carolina, by comparison stands out in looking out for America, as Rush always stressed. Rush was heard noting that Trump in his dealings with "sniveling leftists at NATO" would never let America be the "world's butt boy." Ken said when he first heard that strong, but apt, reference live he "almost drove off the road!" 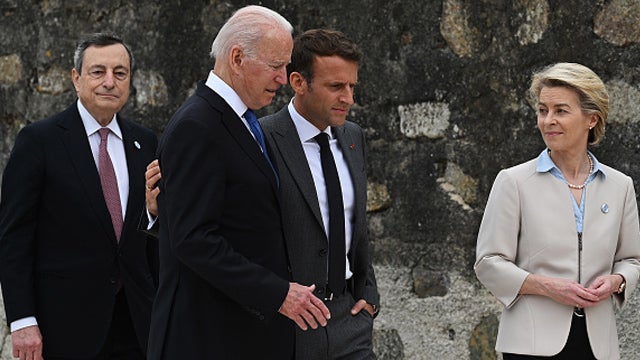 More current proof of Rush's prophecy? French President Emmanuel Macron (whose security is so lax, Ken noted, he was slapped in the face at G7 by a protester) told the world that it is so good to have America "back in the club." Other than saying he wished Macron might have gotten an additional slap in the face, Ken warned, "When the French president is happy about your participation as the American president, I think we're in trouble."

Ken said we should all be "scared" due to Biden's lacking performance in Europe, as "Quid Pro Quo Joe" has shown that it's "slap around time again."